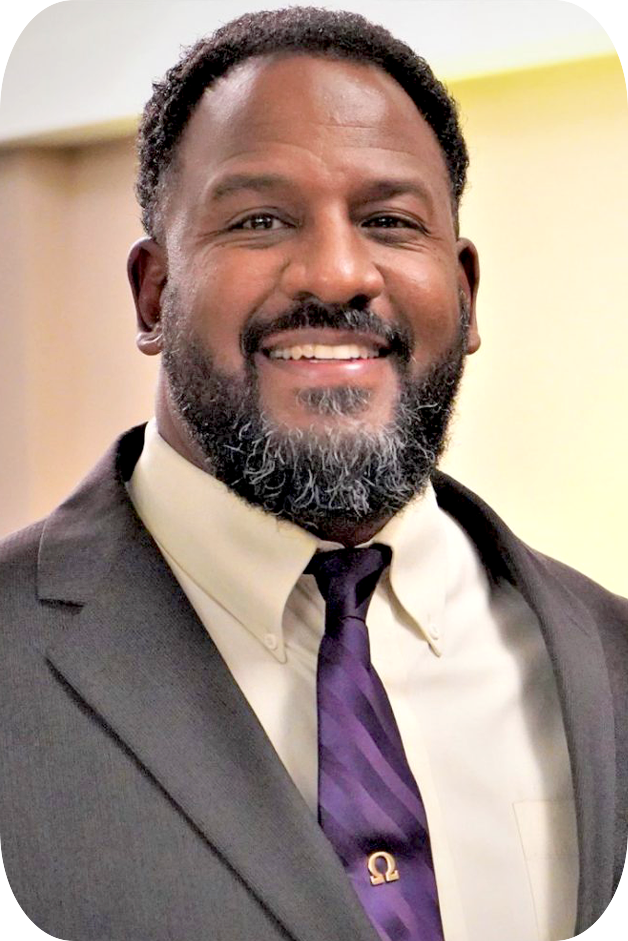 Rev. Maurice L. Scruggs, II was born and raised in Indianapolis, Indiana. As with many young African American men, Maurice was the product of a broken home where he was raised by his mother, Carolyn Scruggs, a woman who loved the Lord, and kept her two sons in church and lifted-up in prayer before God. As a teenager, Maurice received Jesus Christ as his Lord and Savior and began to actively share his faith.

Over the next decade, Rev. Scruggs struggled between chasing promotions and secular success in his career versus answering God’s call to serve. He finally answered the call to preach the Gospel in 2008 and was licensed at Messiah Missionary Baptist Church, under the late Dr. Clifton Rhodes, Jr. in Grand Rapids, Michigan.

Since then, he has served as Youth Pastor, Jail Ministry leader, Men’s Ministry leader, Associate Minister, and Assistant Pastor at multiple churches. He was also one of the founders of the Messiah Mentorship Ministry in Grand Rapids and the Ghana Grace Scholarship Program in Africa.

In 2015, under the leadership of Dr. Walter Gibson, Jr., he was ordained at Pilgrim Rest Baptist Church in Lansing, Michigan.

Rev. Scruggs is completing his Master of Arts Degree in Biblical Studies at Grand Rapids Theological Seminary while currently serving as the pastor of Pilgrim Rest Baptist Church.

His lifelong objective is simply this:

A People of Prayer, Purpose, Power, and Praise Advancing the Kingdom of God.

Empowering Generations Through the Love of God to be Transforming Agents in the World.

The Pilgrim Rest Baptist Church was established in the summer of 1972, as a result of several prayer meetings. Originally called Christians Congregational Church the name was formally changed to the Pilgrim Rest Baptist and Incorporated as such. Thirty-five people were present at the first service where the Reverend Arcelious E. Flanagan was the first speaker. Services were held in the Duncan Building and later the Lansing YMCA.

During the first year of organization, the group established the following boards, Deacons, Trustee, Deaconess and Mothers. The church also organized the Sunday School, the Senior Choir, the Senior Usher Board, and the Young Adult Choir.

In 1973, the congregation adopted the motto: “The House of Prayer” and called their first pastor, Reverend David Whittington, who served until 1978. Under his leadership the Sunshine Singers, the Junior Usher Board, and the Missionary Society were organized. In 1976, the present site was purchased and construction began. The building was financed by a $160,000 bond program. On July 24, 1977, the congregation march from the YMCA to our new church home for a ribbon cutting ceremony.

Following Reverend Whittington’s resignation on June 25, 1978, worship services were conducted by Reverend A.E. Flanagan, who was called as acting pastor for nearly one year.

On May 12, 1979, Reverend A.E. Flanagan was installed as pastor. During his administration, the Nurses’ Guild, a Bible Study for teens, a Junior Deacon Program, a Junior Sunday School Department, Junior Church, and the Christian Board of Education was established. Reverend Flanagan also spearheaded several outreach ministries including a street ministry and a city wide revival. The church has fostered services evangelism programs including “This is Your Life American, Disciples of Christ, Evangelism Explosion, and Child Evangelism Fellowship, in which the gospel was shared and many souls were brought to Christ.

Pilgrim Rest Baptist Church is blessed to have several young men declare the ministry while under the leadership of Reverend Flanagan. Two of which have also founded churches, Reverend Robert E. Nicholson and Reverend Rodney Patterson.

For Nothing will be Impossible with God”

In 1993 a pulpit committee was convened to select a new pastor. On September 4, 1994, Reverend Patrick A. Jennings was called to pastor Pilgrim Rest Baptist Church. Under Pastor Jennings’ leadership, the Public Relations Committee and the A.E. Flanagan Scholarship Council were established. In 1995 our first and only parsonage was purchased. We extended land from our grounds to Benjamin Davis Park in 1996. Pastor Jennings restructured the organization of the church. He established the following ministries: Agape circle, Women’s Ministry and the Men of Standards Ministry. Reverend Jennings preached his last sermon at Pilgrim Rest in January 4, 2004.

At this time, Pilgrim Rest was without a pastor. The church banded together with prayer, fasting and faith. A Transition Team was formed during this time to take care of the administrative functions of the church. We had many visiting Pastors bring the spoken word every Sunday. During the transition period, the Go-Ye Ministry was developed and the Youth Choir was re-established. We continued to forge ahead. The Pastor Search Committee was formed to find a new pastor for Pilgrim Rest. After many candidates were presented, Pilgrim Rest heard from God and in October 2006, he sent us Pastor Walter Gibson, Jr., from Houston, Texas to lead us into our future.

“For Nothing will be Impossible with God”

Pastor Gibson was installed on Sunday, January 21, 2007. Under the leadership of Pastor Gibson, the church is experiencing tremendous growth spiritually and corporately. This growth includes the establishment of Marriage, Senior, and Young Adult Ministries. In addition, under Pastor Gibson’s leadership, other new ministries that have been developed are the Praise Team, Helping Hands, Mime Ministry, and Singles for Christ.

In November 2008, we experienced physical growth with the addition of our Education Wing. Construction was completed in April 2009. Pastor Gibson established a program to fund new growth for Pilgrim Rest called “Together We Can”.

Not only is the Education Wing a tremendous resource for our congregation, but it also provides an avenue for us to open our doors to meet the needs of the community.

Pilgrim Rest Baptist Church is a church that continues to keep its focus on advancing the Kingdom of God. We know that through God all things are possible and we know that the best is yet to come!